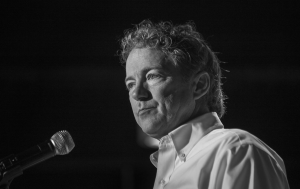 Asking basic questions about the $40 billion blank check to the Ukrainians is just one of several savvy moves by the Kentucky senator on the political rebound.

PHILADELPHIA—It’s been almost seven years since the dumbass livestream, a United States senator’s words, not mine.

“The third question, most popular question from Google is: ‘Is Rand Paul still running for president?’” Sen. Paul read out from the campaign trail. “And, I don’t know, I wouldn’t be doing this dumbass livestreaming if I weren’t. So, yes, I still am running for president—get over it.”