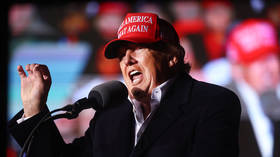 Former US President Donald Trump has praised Russia’s Vladimir Putin for his strategy in eastern Ukraine, arguing that the Russian leader outmaneuvered Joe Biden by declaring the breakaway republics of Donetsk (DPR) and Lugansk (LPR) to be sovereign states.

“I went in yesterday, and there was a television screen, and I said, ‘This is genius,’” Trump told radio host Buck Sexton in an interview on Tuesday. “Putin declares a big portion of the Ukraine – of Ukraine – Putin declares it as independent.” He added sardonically, “Oh, that’s wonderful.”