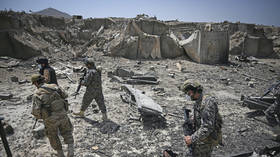 Taliban troops walk among the debris of a destroyed CIA base near Kabul. September 6, 2021. © AFP / Aamir Qureshi

Before the Taliban takeover in August, the CIA reportedly evacuated thousands of Afghan commandos belonging to its shadowy Zero units. These outfits conducted deadly night raids and have been accused of committing “war crimes.”

The agency flew out more than 20,000 “Afghan partners” and their families, according to two unnamed former officers cited in a recent Washington Post editorial. The US is thought to have gotten between 60,000 and 120,000 Afghans out of the country.