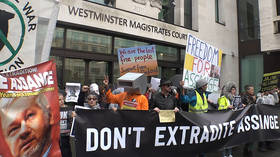 With his supporters rallying outside the court building, Julian Assange showed signs of exhaustion and psychological torment as his lawyer made a bid to delay US extradition proceedings – but the London court ruled against him.

Cleanly shaven and dressed in a navy suit, the WikiLeaks co-founder appeared before Westminster Magistrates Court on Monday to seek the postponement of an extradition hearing scheduled for February – but the impact of six months behind bars at London’s maximum security Belmarsh Prison have clearly taken a toll.