‘Our property now’: (Most) US lawmakers rejoice over Assange arrest 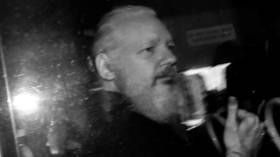 US lawmakers from both parties cheered the arrest of WikiLeaks founder Julian Assange, while President Donald Trump claimed he ‘knows nothing’ about the outlet, despite often saying ‘I love WikiLeaks’ during the 2016 campaign.