kidnappers, should be condemned not condoned

Vanessa Beeley is an independent investigative journalist and photographer.

She is associate editor at 21st Century Wire. 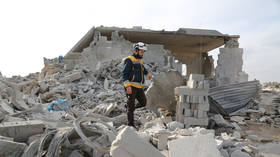 A member of the White Helmets, Idlib Province © Anas Alkharboutli

The White Helmets, “volunteers” who reportedly “rescue Syrians from rubble.” Never in history has such a group been so feted by the elite, or received so many awards from institutions acting as extensions of US and UK hegemony.

A recent panel at the UN Security Council in New York revealed the shocking evidence of White Helmet involvement in organ trafficking in Syria. The lucrative trade of human body parts, bones, blood and organs is one of the most protected and hidden harvests of war.